Guide to Spacing your LED Downlights

The first and most important tip about downlights is that you really should choose LED at the outset or replace any halogen downlights you already have. Halogen is being phased out. It’s going the way of the old incandescent bulb. That’s because LED is much more efficient than halogen. Governments need to reduce energy consumption and regulating halogen out of existence in favour of LED is an easy win. It’s also a win for everyone else because LED is a superior technology that lasts longer and is nothing like the fire hazard that halogen could be. You can cover most LED downlights with insulation without any worries. They last for years. So get with the program and go LED. You won’t regret it.

Before you decide on your LED downlight spacing while planning the perfect layout, the first thing to consider is the function you want the lighting to perform. Is it for a living space that doesn’t call for clinical lighting or a kitchen that needs proper illumination? Some strategically placed downlights can be just for highlighting a specific area or angled to light objects on the wall such as pictures. Your lighting scheme should reflect the room’s purpose and sometimes that can be purely decorative.  That said, having the light directly overhead and evenly spaced is generally the best lighting scheme. To calculate the spacing you need to know the luminous flux of the downlights and their beam angle. Beam angle refers to the spread of the light. So what’s luminous flux? It’s a technical term for the amount of light emitted, which is measured in lumens. The more lumens the more light.  800 lumens is the standard brightness for downlights. Any less is mood lighting and any more is a bit too bright for domestic applications. Also keep in mind that most  LED downlights are dimmable. The next thing to consider is the beam angle. For general room lighting a 100 degree beam angle gives a good even spread. Any less than that is too narrow and creates spaces that are very bright and others that are less bright. You want to eliminate shadows and not waste light too close to the wall.

Arranging the lights on the ceiling should start from a corner and for standard 800 lumen downlights with a 100 degree beam angle, they should be 1 metre from the wall and then evenly spaced on the ceiling at 1.2 or 1.5 metres apart, depending on the dimensions of the room. What is colour temperature?

When you are looking for LEDs you will see various figures on the box to do with ‘colour temperature’. Lights are described as being ‘warm white’ or ‘cool white’ with figures like 4000K or 6000K.  The higher the figure, the ‘whiter’ the light appears. 6000K, which is usually called cool white has quite a clinical appearance and you wouldn’t use it for living rooms. The colour temperature most people are comfortable with in living spaces is warm white, which is 4000K and below. You don’t have to stick to the ordinary white downlights, but even with them there is a whole range of choice. Often there is a selection of colour temperatures on the light so that you can switch it to warm white, neutral white or cool white. You can even get smart versions that you can dim via an app or change to all the colours of the rainbow if that’s your thing.

There are gimbal downlights, also called adjustable downlights, which you can adjust to focus on a wall or to angle away from a line of sight to reduce glare. Downlights don’t have to be round either. You can get square ones and rectangular ones with two or even three lights in them. So you are not limited to one and only one style of recessed lighting. There are round downlights with a recessed light called pinhole downlights. These produce a narrow beam and low glare and are often used as effect lighting. All of these various styles of downlight are good for different purposes. If you are after bathroom downlights, you need to select ones that are nice and bright and have good colour rendering. It also helps if they have a good IP rating (IP65) to protect against steam and splashes. Check the box to see. 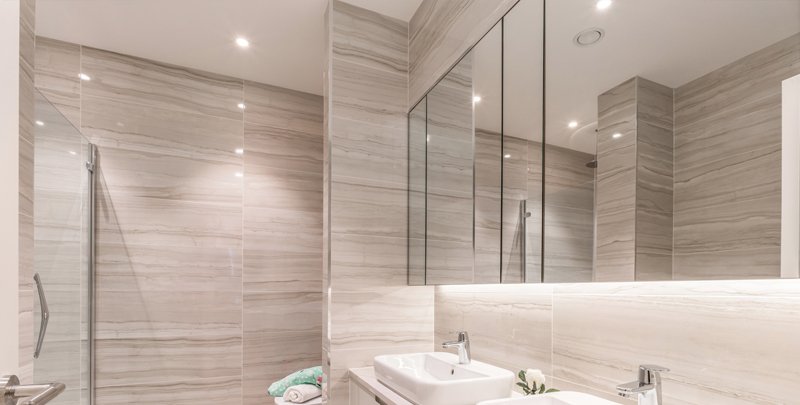 Colour rendering is different from colour temperature. You would be best served with a neutral 5000K colour temperature in the bathroom, but a CRI number 80 or above is important. CRI stands for Colour Rendering Index, which is a scale from 1 to 100. The higher the number the more realistic colours appear. If you want to see what you really look like in the mirror, a high CRI number is recommended. That said, lights with scores of 90 and above tend to be specialised museum and medical lighting, which might be overkill.

It really is time to replace old halogen downlights. You’ll save money on power bills and won’t have to replace the bulbs all the time. But what if the hole left in the ceiling is too large to fit the new LEDs that you’ve chosen? Not to worry, there are adaptor plates available to fix that problem. And there isn’t any need to change the spacing of the downlights because you would replace like for like in terms of brightness and colour temperature.

So if you want the uncluttered look of downlights in your home without the ongoing expense and no hassles about insulation, take a good long hard look at LEDs.

Metropolitan’s always ready for service within 1 hour and no extra public holiday fees. If you need emergency repairs in Perth, contact Metropolitan this long weekend!

Trent attended within 1 hour of calling to diagnose and locate an electrical fault. He had the power going again in under 1.5 hours. Would recommend Trent as he worked so effectively.