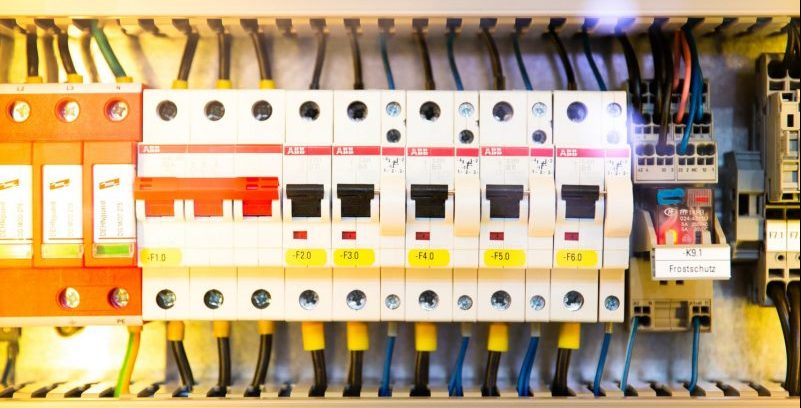 What to do when a Circuit Breaker Trips

When the lights suddenly go off generally your first thought is that there has been a power outage. But only your house has no power and when you check other parts of the house the power is still on there. The likeliest thing is that a circuit breaker has tripped. Most of the time this isn’t something you need to call an electrician about.  A house circuit breaker tripping is a very common occurrence. All you need to do is follow these simple steps. That’s how to turn the power back on.

If it is dark, the first thing to do is find a torch or use your phone’s flashlight mode. You really don’t want to mess around inside your fuse box if you can’t see what you are doing. The next thing to do is to turn off and unplug all the appliances on the circuit that isn’t working. The two main reasons why you get an electricity trip are a circuit overload or a short circuit.

A circuit overload just means that you are running too many appliances at once and trying to draw more power than the circuit can provide. It’s pretty obvious that this is the cause of your problem if the power has tripped when you have put on way more things than usual, such as the toaster, an electric frypan, the kettle and a blender all at once while the fridge is running. Some circuits can handle this, but older homes can struggle with excess demand.

A short circuit is usually caused by faulty appliances. That’s why the first thing to do is turn them all off at the socket and unplug them. Now it’s time to visit the fuse box. There are various places where this can be – outside, in the laundry or even in the garage. Mostly it houses both the switchboard and the meter, so people also call it the meter box or simply the switchboard. What you should see inside is a number of switches or breakers. The breaker that has switched off is the one that controls the circuit that has gone dead. Just turn it back on.

All should be well and the power to that circuit should come back on. If it doesn’t, and the breaker immediately trips again, it means the short circuit is in the system.  That is something for an electrician to sort out. But otherwise, all you will have to sort out from here is which the offending appliance is. Finding out which appliance has caused the problem is simply a process of trial and error – plug an appliance in, turn it on and if it results in a tripped breaker then it’s the culprit.

How do you fix a breaker that keeps tripping?

Since they only cost a few dollars, if your breaker is faulty it should be replaced and not repaired. And breakers, as they are important electrical safety devices, should be installed a licensed electrician if you don’t want to void your insurance policy. You could also consider using fewer appliances on the circuit that keeps tripping.

Why is my breaker tripping all of a sudden?

A breaker can start tripping if it is being regularly overloaded. A new appliance that draws a lot of power might be the issue. If the breaker is tripping for no readily apparent reason it is advisable to have it checked by an electrician.

How do I find out what’s tripping my circuit breaker?

If you problem is a faulty appliance, it just a case of trying appliances one by one until you strike the one that trips the circuit breaker.

What causes a main circuit breaker to trip?

Lightning strikes and power surges can trip the main circuit breaker.  If an individual circuit breaker fails and doesn’t trip for an overload or short circuit, the main breaker trips instead as a backup safety shutoff.

How do you fix a short circuit?

You fix a short circuit by removing the appliance that is causing it and throwing it away. For short circuits within the system caused by wiring faults, call a licensed electrician. Don’t create a fire hazard, get a certificate of compliance.

How much does it cost to replace a circuit breaker?

Circuit breakers only cost a few dollars. The rest is what your electrician will charge for roughly an hour’s labour.

What are the warning signs of an overloaded electrical circuit?

Lights dimming or flickering is one sign. Another is powerpoints getting warm and a burning smell. Powerpoints that buzz also indicate a problem. They’re not supposed to make a noise.

How many times can you trip a circuit breaker?

Quite a few, but if you are constantly tripping your circuit breaker it is advisable to resolve the issue that is causing the tripping.

How do I find out why my electricity keeps tripping?

If your electricity keeps tripping and it is not because you are overloading the circuit or have had an incredibly bad run of faulty appliances, you can find out by consulting an electrician.

How do you reset a tripped breaker?

Simply switch it back on after having turned off any appliances on the circuit.

What is the lifespan of a circuit breaker?

You can reasonably expect a circuit breaker to have a lifespan of 30 years or more.

How do you fix an overloaded circuit?

You can get an electrician to increase the capacity of a circuit or you can use fewer appliances on the circuit that is overloaded.

What happens when a short circuit occurs?

When a short circuit occurs your circuit breaker should trip and turn off the power to the circuit.

Can I replace a breaker myself?

We don’t advise doing things that really should be done by a licensed electrician.

The unexpected can leave you searching for a local plumber or electrician on a public holiday. Whether it’s a blocked toilet, leaking roof, a failing hot water system or faulty wiring, Metropolitan is here to help. We’re available at no extra charge for after hours or public holiday work.